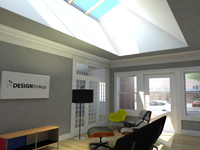 In our next project, we take a look at a Portland, Oregon home. Specifically we investigate how to bring more natural light into the living room located in the center of this roughly symmetrical 80 year old house. 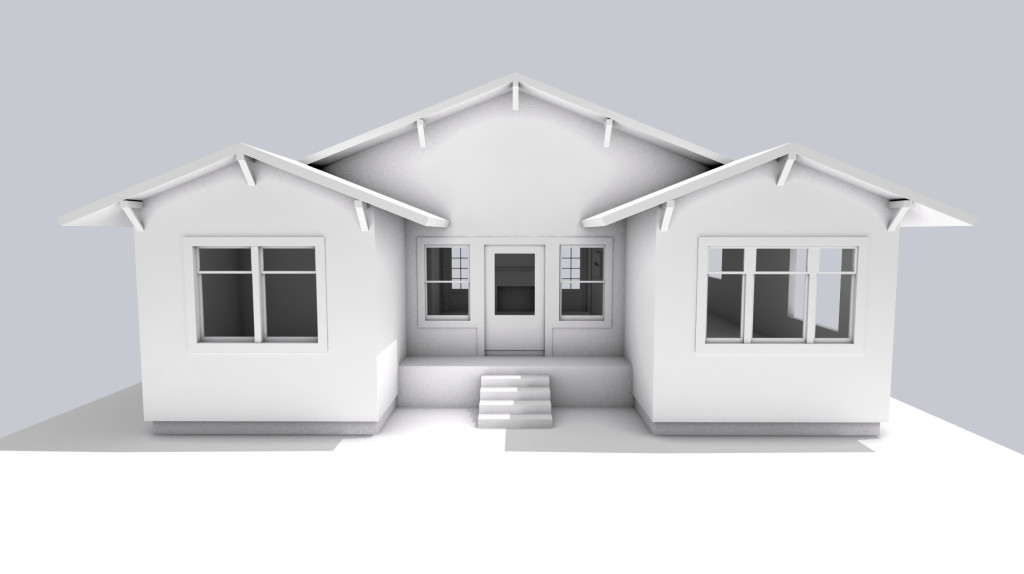 Here is a simplified plan of the house: 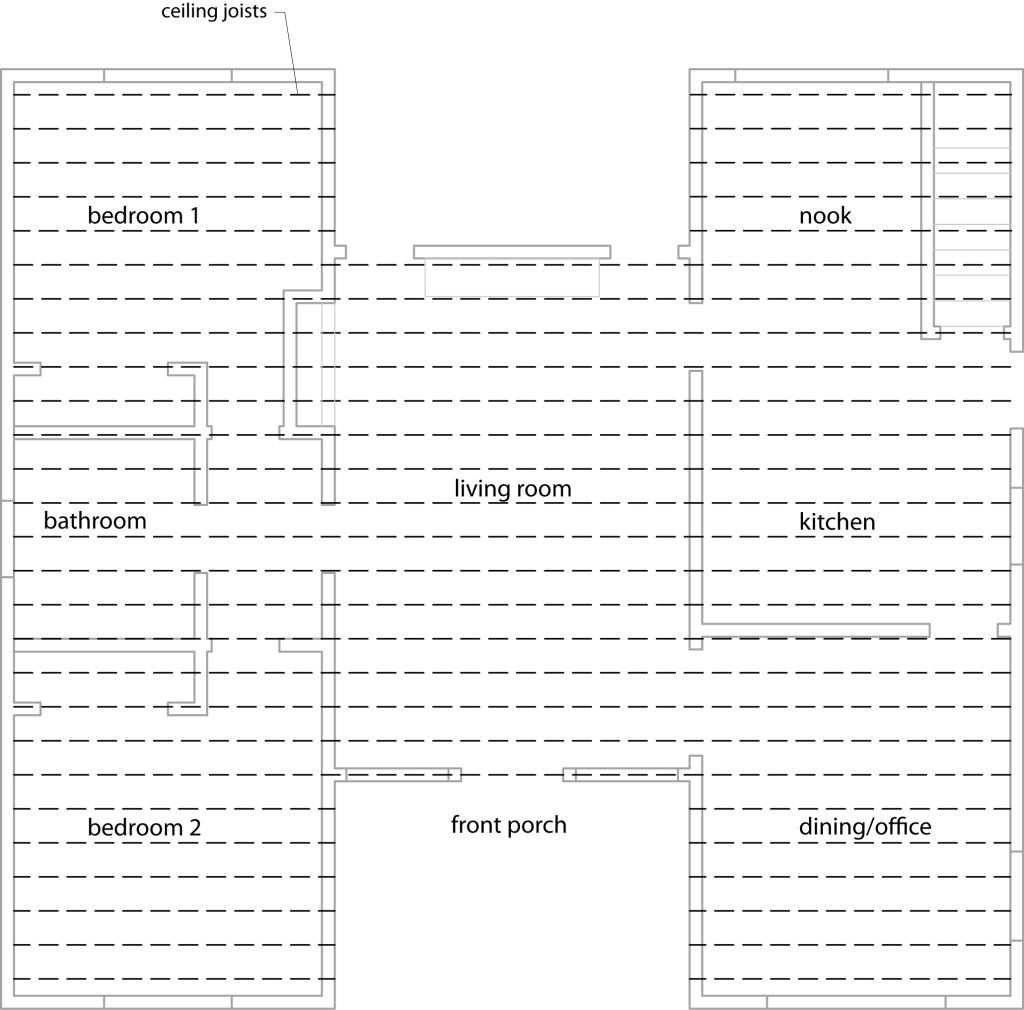 And here are a couple of images of the existing living room. 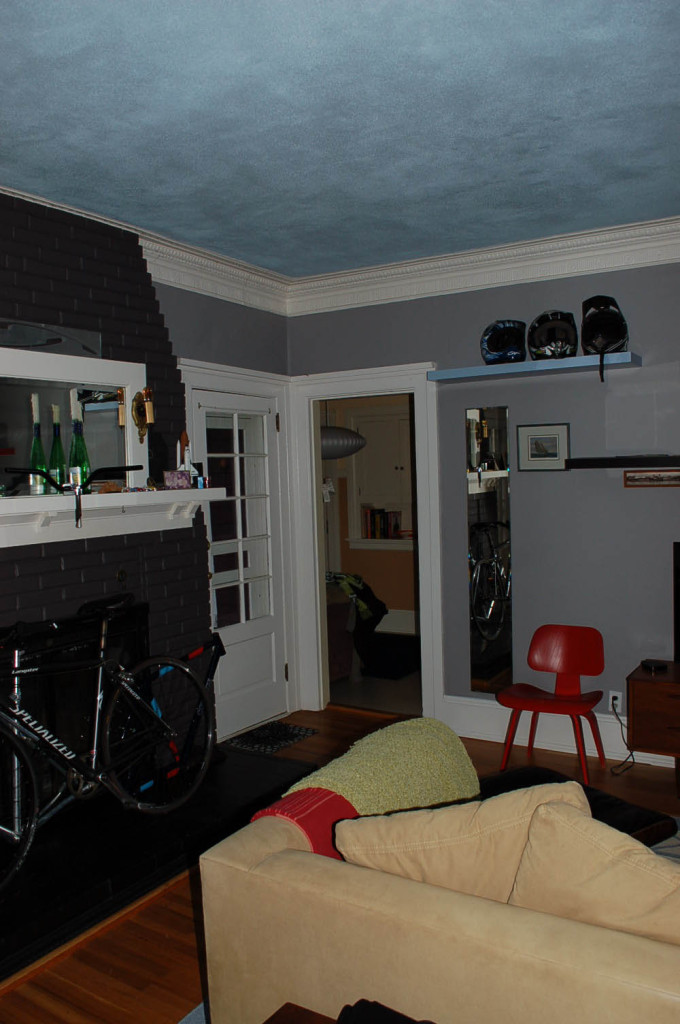 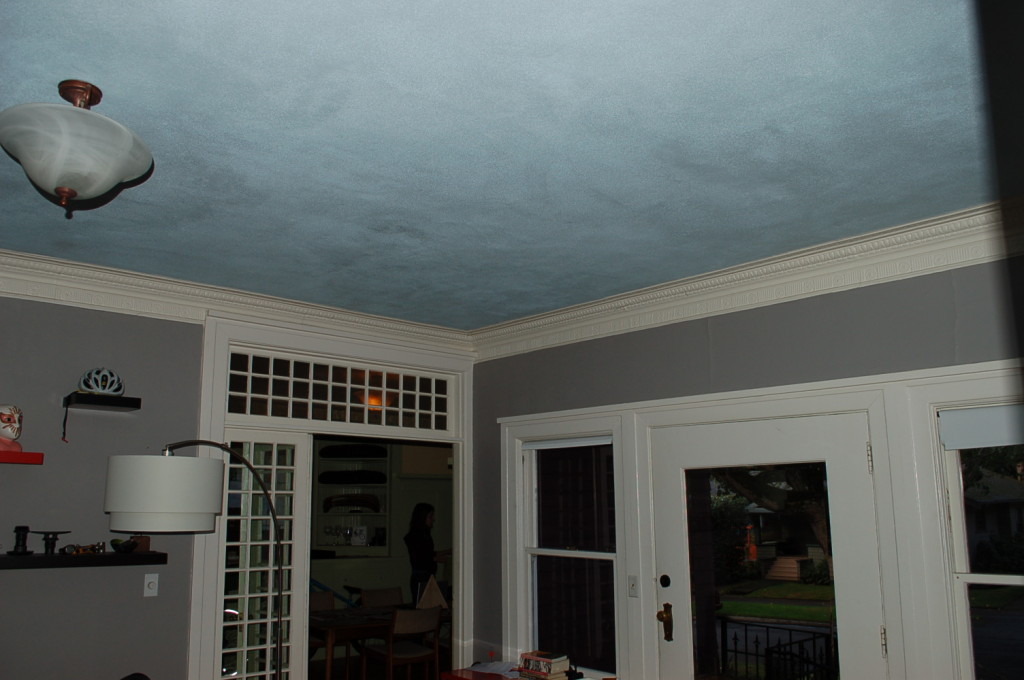 Looking towards entry and dining room. This is the viewpoint from which we will render for video.

Below is a series of sectional cuts through the house.  We believe the best way to bring natural daylight into the living room would be to puncture the roof creating a pathway to bring light in from above. 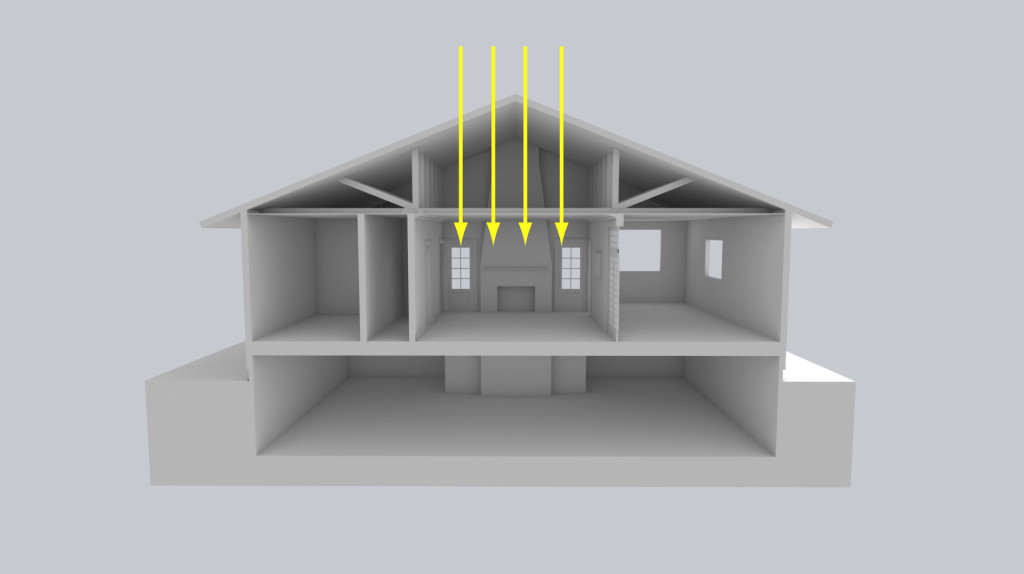 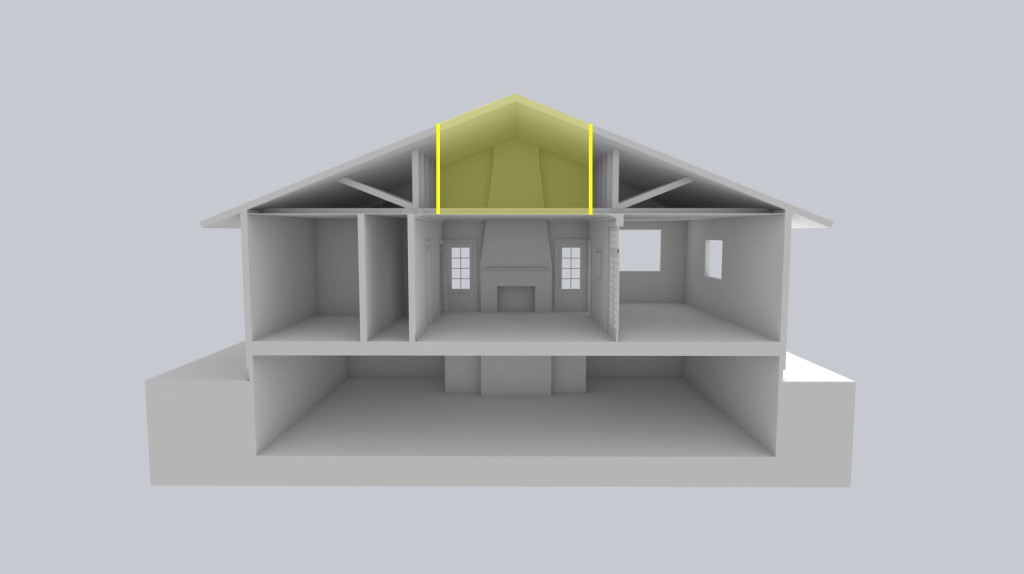 Plan with indication of opening in ceiling, centered on room (below). 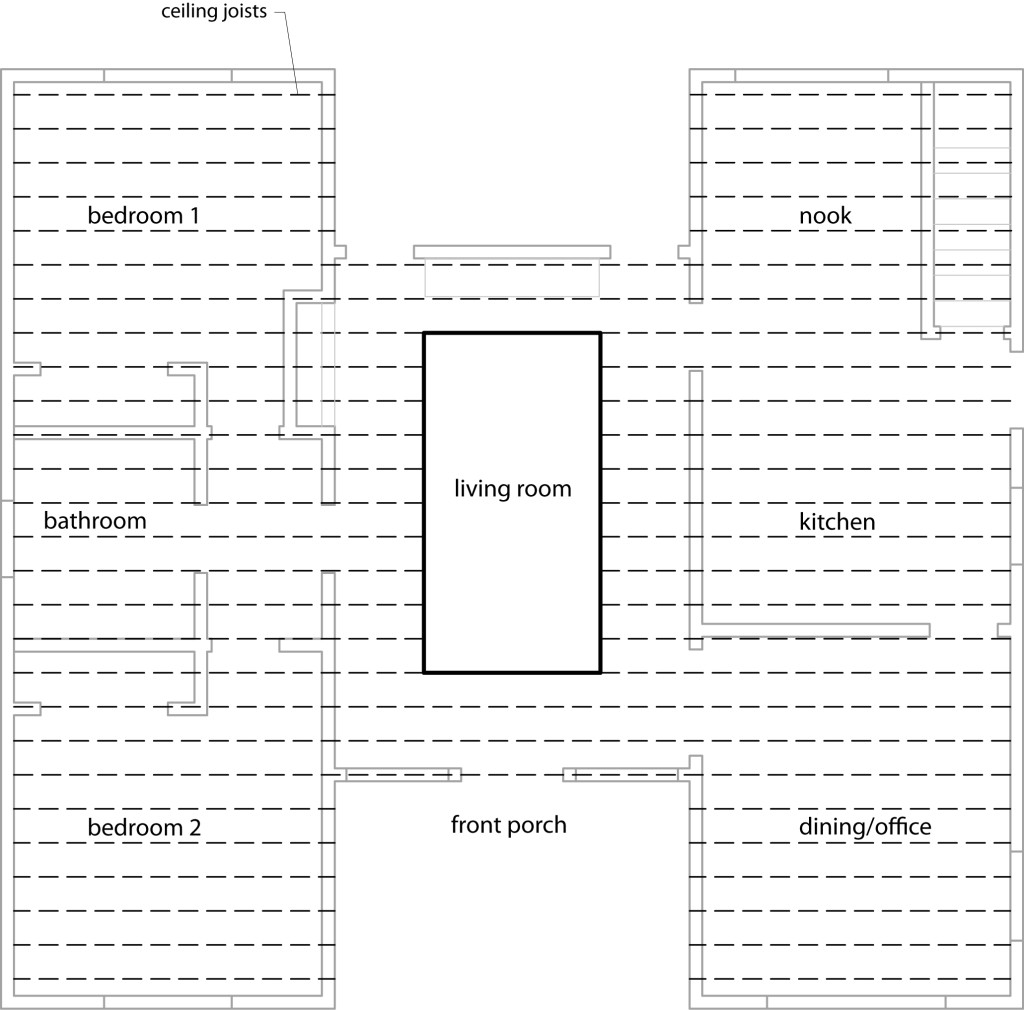 However, because the ridge of the roof runs east / west over the middle of the living room and to keep the project as simple as possible the opening should avoid the ridge because this is the forces of the roof intersect.  These are not prefabricated roof trusses that we are working with.  This is a built up roof system which works like a truss, utilizing the ceiling joists as tension elements. 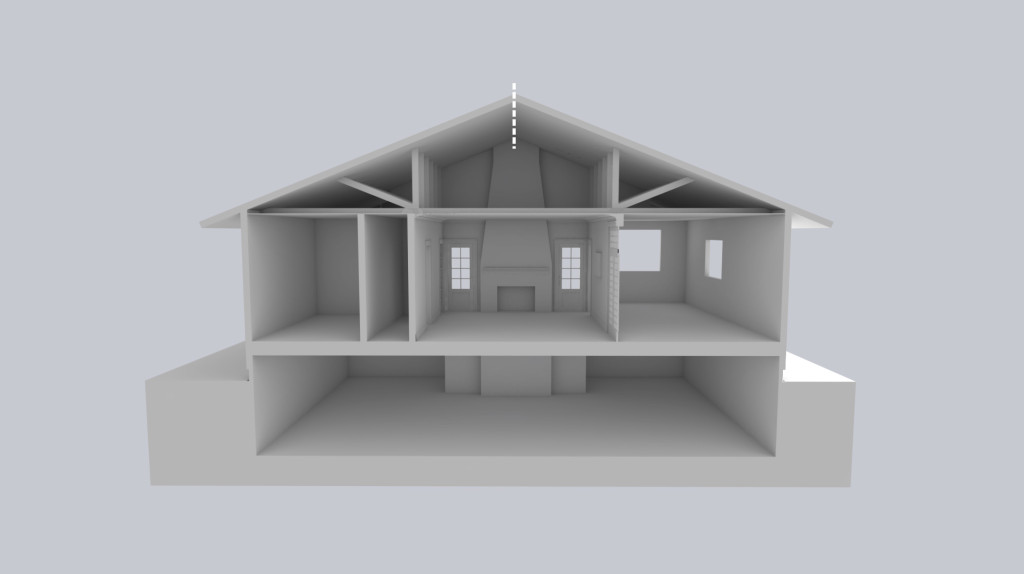 As such there are two cost-effective locations to place the opening to the sky: Either on the north side of the ridge allowing more consistent, indirect light to enter the room… 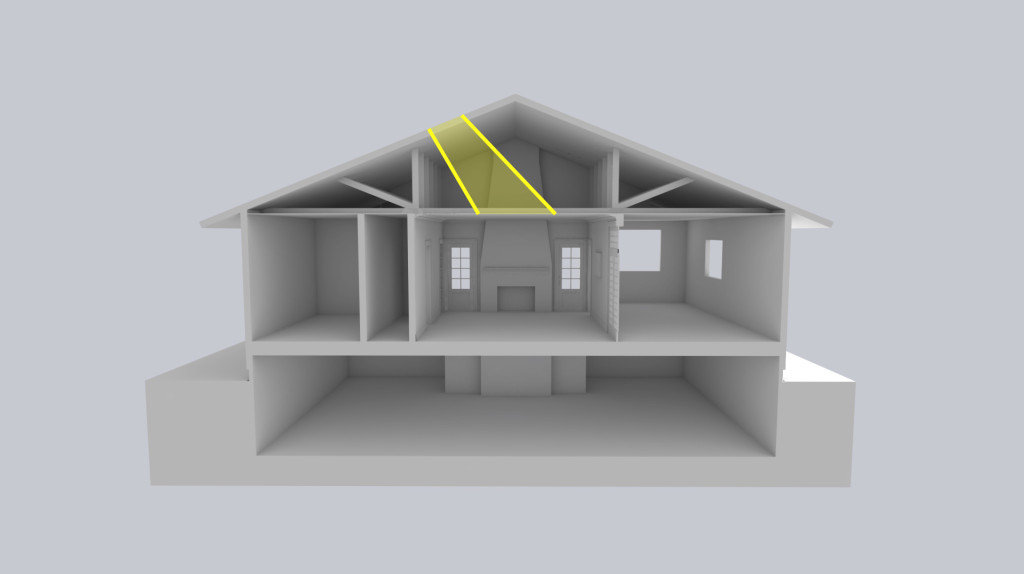 or on the south side of the ridge allowing direct sunlight to enter the space. 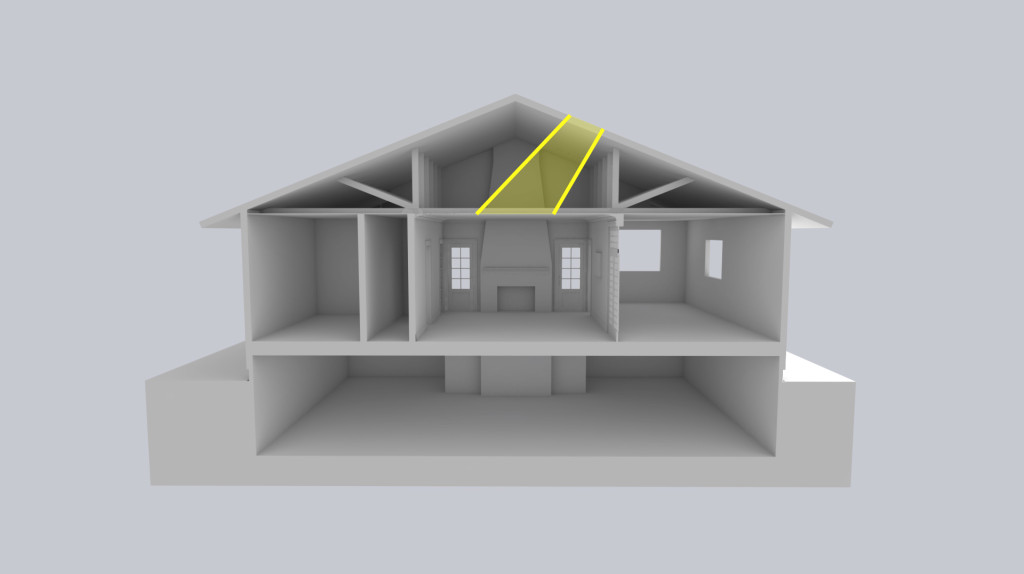 The owner of the home prefers for the opening to the sky to be on the south side.  We agree with this assessment.  We will explain why further on in this post.  Our design considers removing several ceiling joists.  If this is deemed not feasible, the concept will be nearly as strong with the ceiling joists remaining. 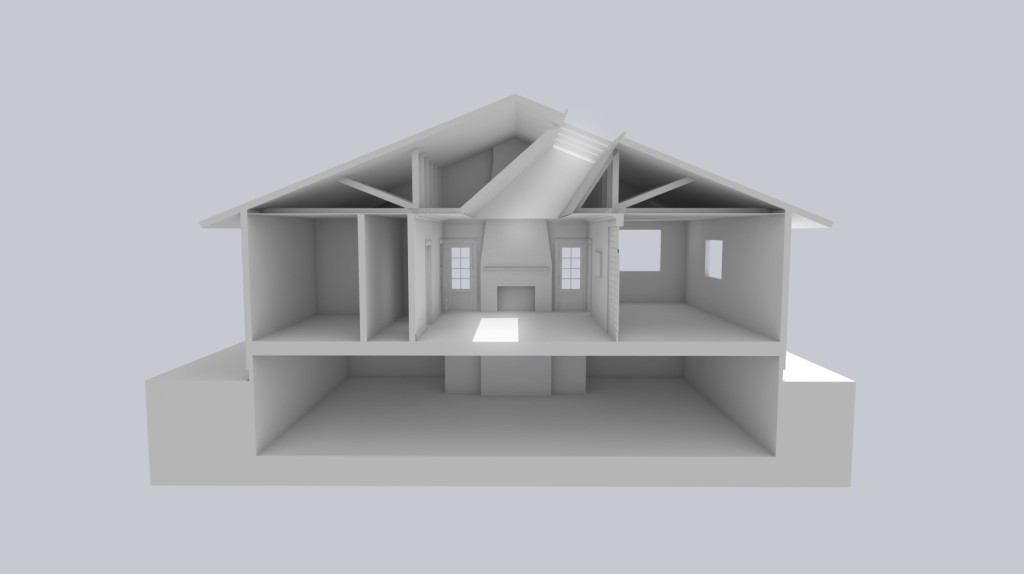 The effects of placing a large skylight into the roof of a home in Portland Oregon will change the quality of the space whether the light comes from the north or south.  We will use time-lapse renderings to understand the effects of daylight on the space at the spring equinox and the summer solstice, both with and without a shading device.  Please take a look at our video below to see how the daylight tracks through the room.

First we will look at the spring equinox without a shading device.  We picked this event to study because its when the days are as long as the night.  We chose to align the opening with the path of the sun at this time of the year because the equinox roughly represents the midpoint of the sun’s altitude difference throughout the year.  That means for roughly half the year, specifically throughout the winter months, the sun will be at a lower altitude than the central axis of the opening allowing daylight to bounce off the more vertical face of the shaft as the sun passes from east to west throughout the day.  The opposite will occur during the summer months: the sun will be at a higher altitude, more vertical, and bounce off the horizontal face of the shaft. 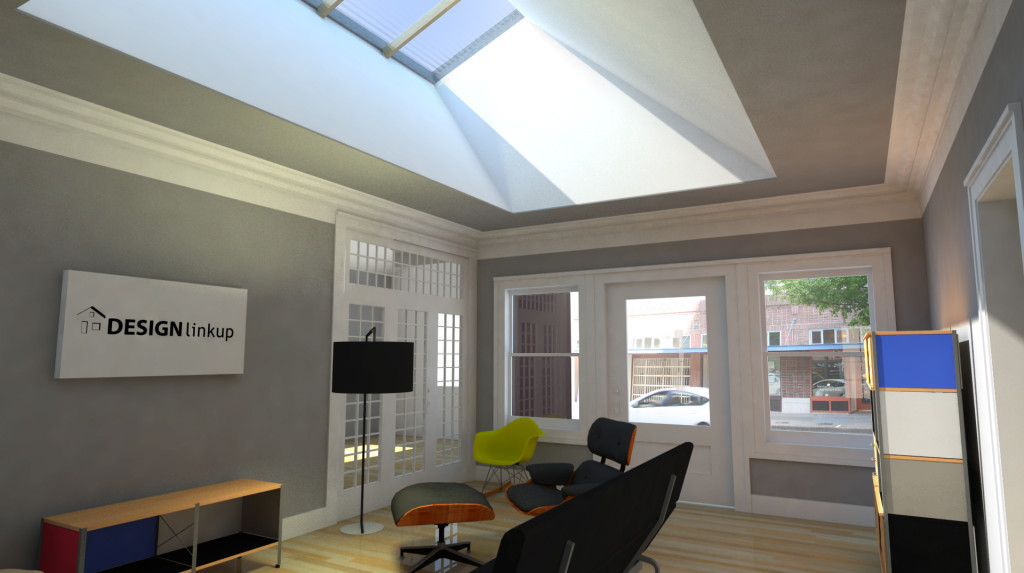 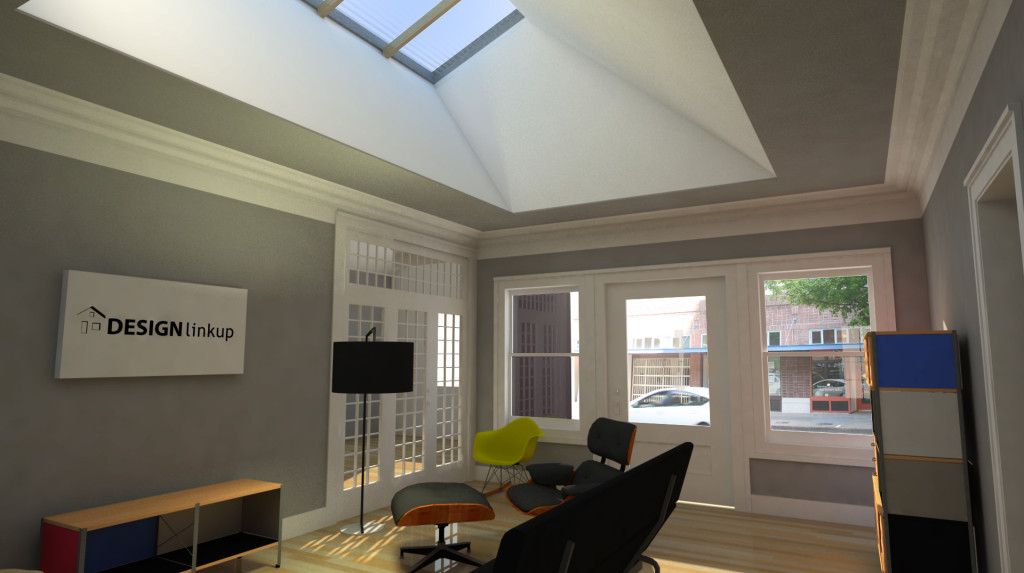 Next we take a look at the summer solstice -the longest day of the year.  This is an important point in time to investigate because it is when the sun is at the highest altitude during the year. 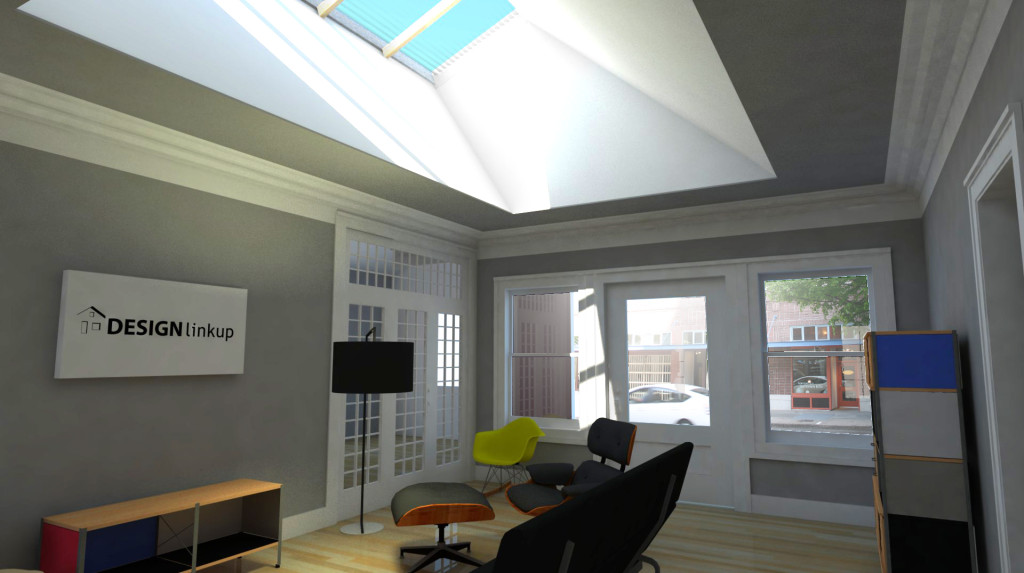 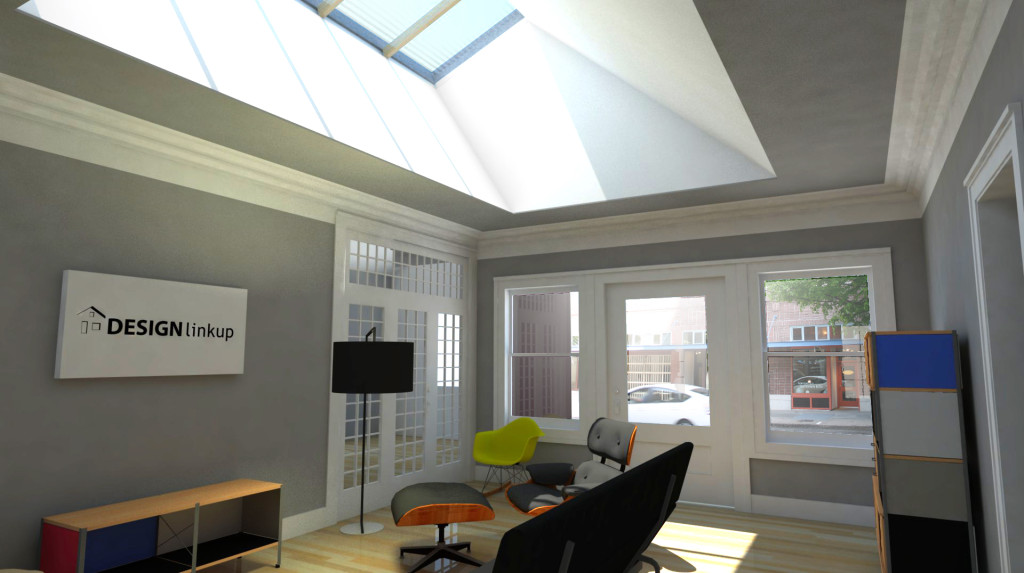 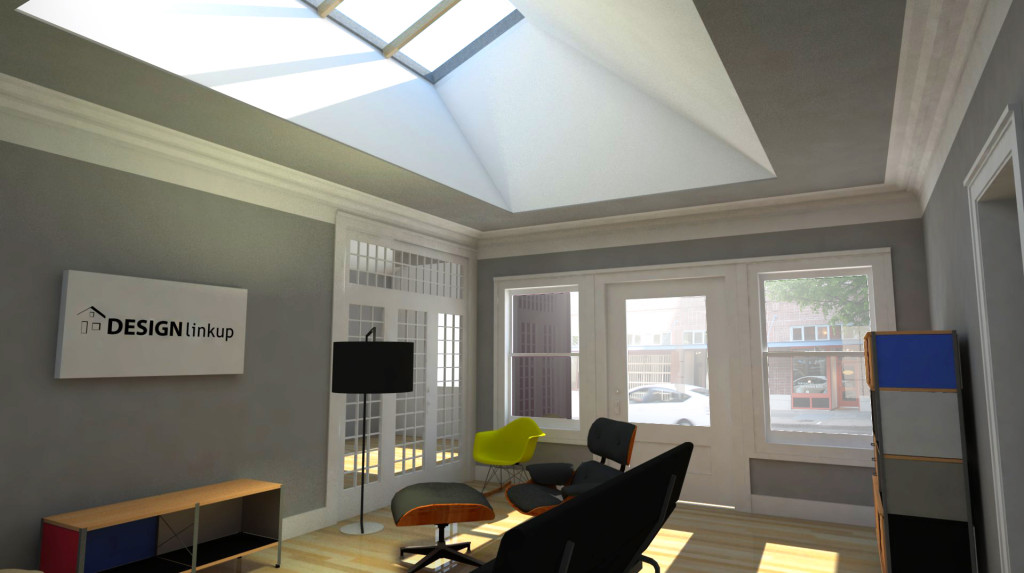 We see the difference in solar altitude as compared to the spring equinox.  We notice that the space is significantly brighter which is expected.  Notice how much light bounces around in the space.  This contributes greatly to the brightness of the space.

Next we look at the equinox again, however this time a shading device is employed.  We tested a series of approximately 30 mm wide concave strips of reflective material running parallel to the face of the skylight glazing.  Note that a significant amount of natural daylight is allowed to pass through at this time of year.  The objective is to block most of the natural daylight during the summer months. 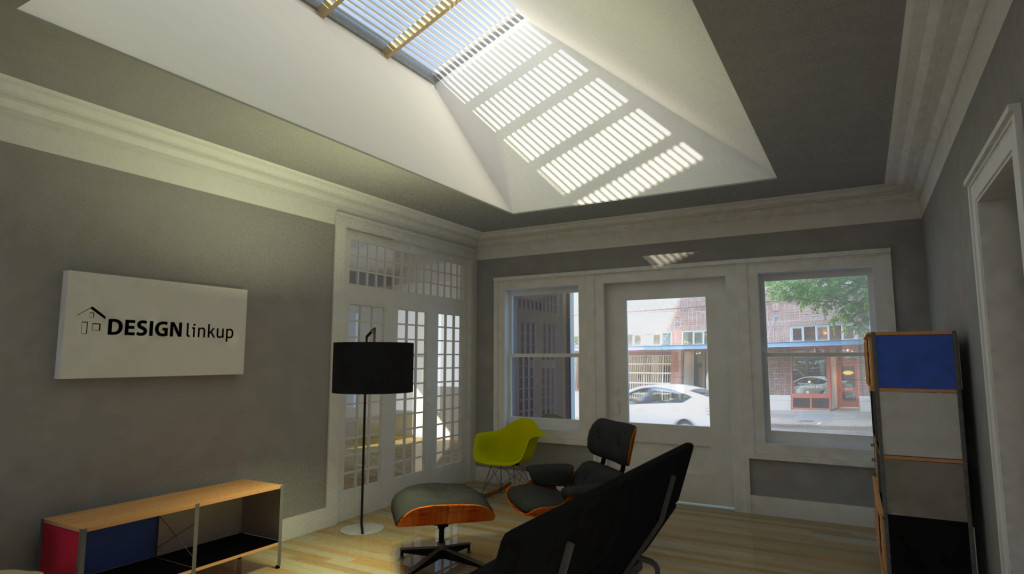 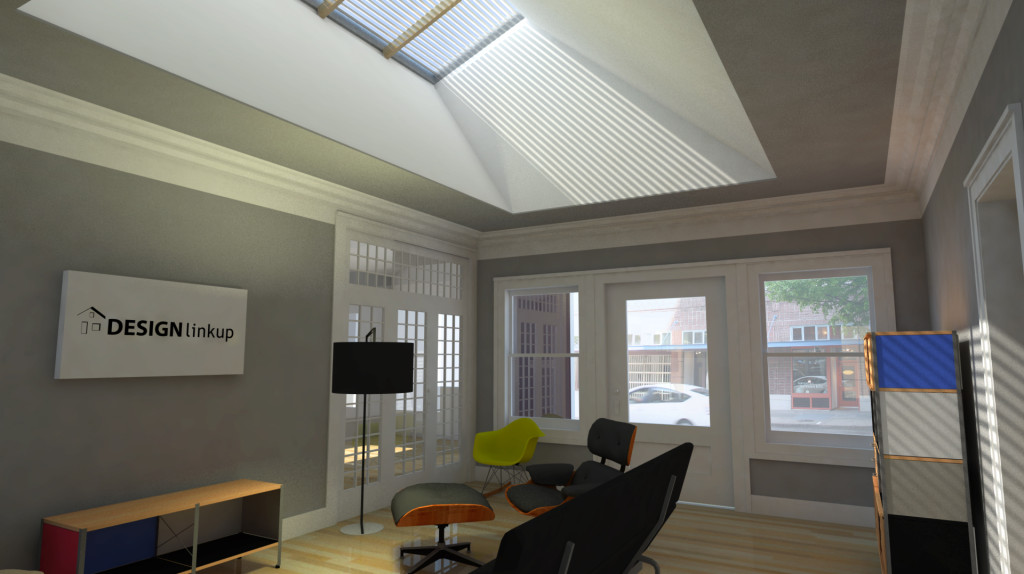 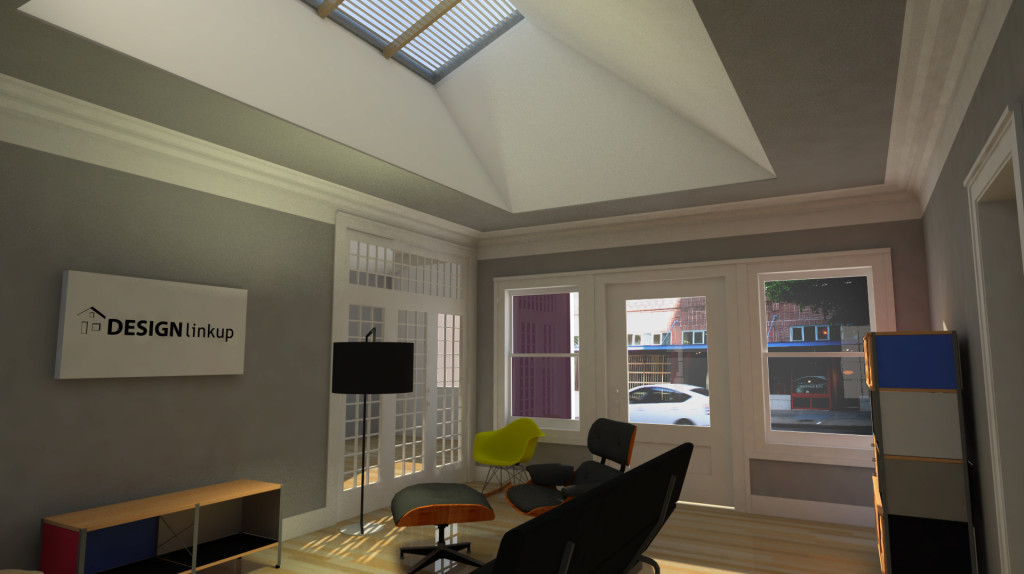 Next we look at the summer solstice again, this time with a shading device employed.  Most of the direct sunlight is reflected away reducing the mean radiant temperature of the space during the warmer months. 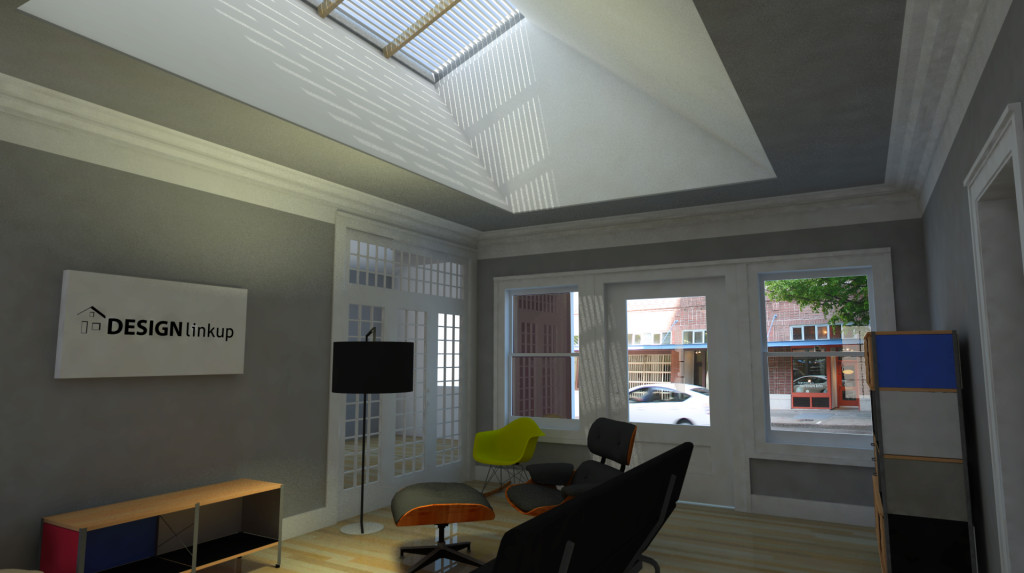 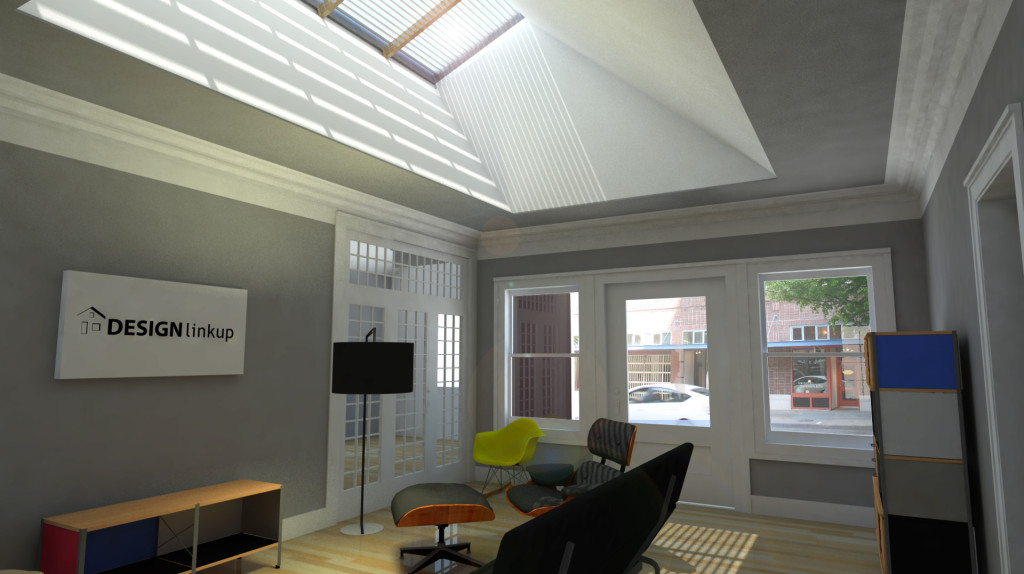 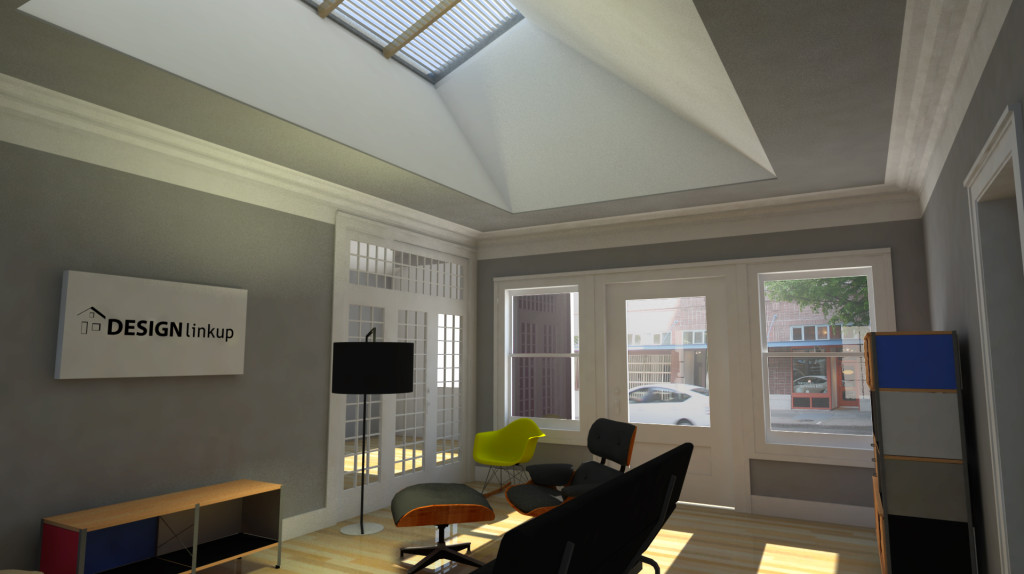 Climate and environmental conditions should be a driving force in the design of this concept.  Even though the benefits of reducing or eliminating direct sunlight into occupied space is normally desirable, we believe that in this case its not the best strategy. Considering that Portland is significantly a net-heating climate by a significant amount and that there are very few uncomfortably warm days and relatively few days with clear skies, it makes sense for this project to employ a strategy that allows full daylight to enter the space.  The benefit realized during the long winter and spring will far out-weigh the drawback of a few hot days in the summer.

A big issue to deal with is the structure of the roof.  We understand that for this concept a large number of ceiling joists will have to be cut.  This compromises the integrity of a roof system that likely uses the ceiling joists to absorb tension forces. Thus, a solution will have to be devised that will transfer these forces across the ceiling.  In order to create such an opening in the ceiling, we imagine kind of a “horse collar” be constructed out of steel that transfers force around the opening in the ceiling. 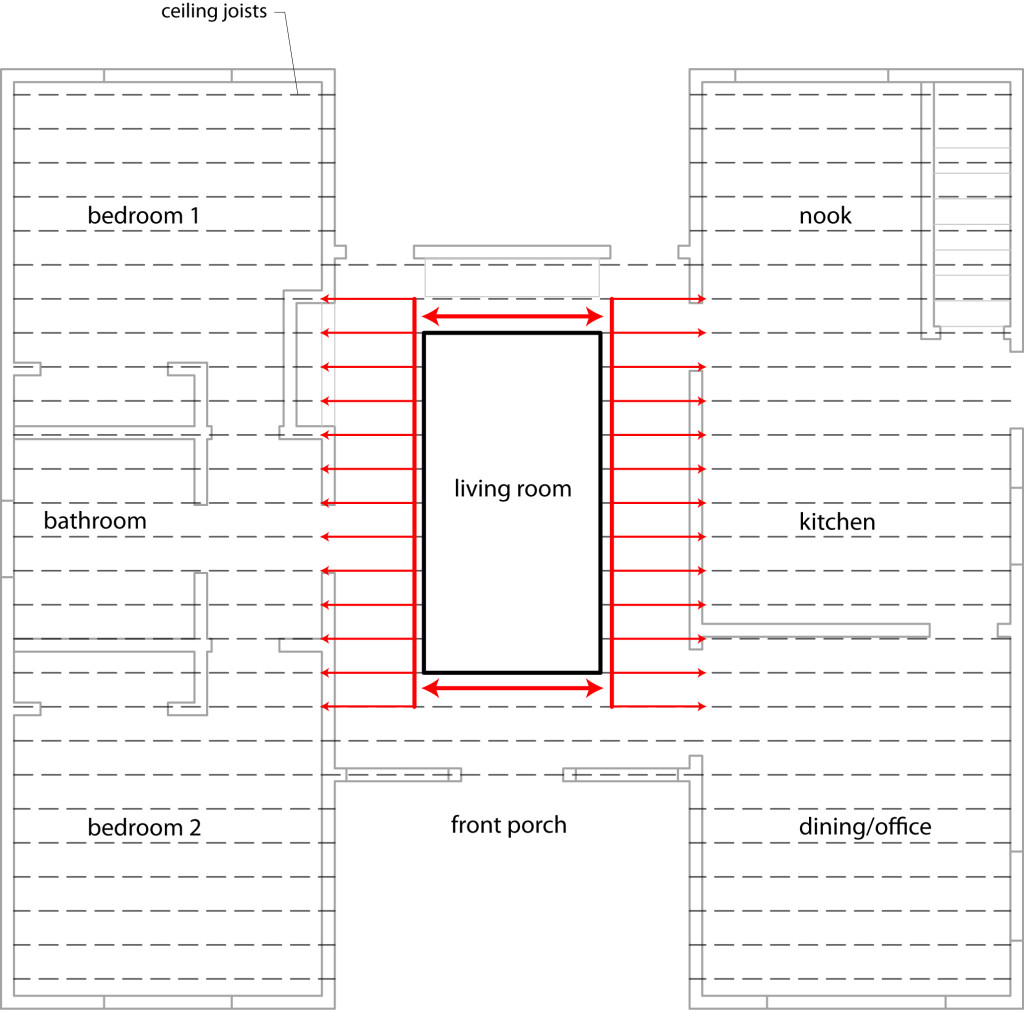 Here is a video that summarizes the project.  Thanks for taking a look at this project.  Take a minute and share your thoughts!