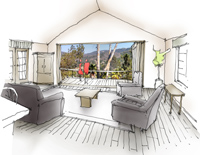 This property is located high on a hillside in southern California and as such tremendous views  exist to the southeast from the living room of this ranch-style home.   There is also opportunity to take advantage of abundant natural daylight to lighten up the interior space, specifically the living room in this case.

The diagram below shows the context.  The southeast side of the house faces the valley and hills to the southeast.  The valley is approximately a mile wide. 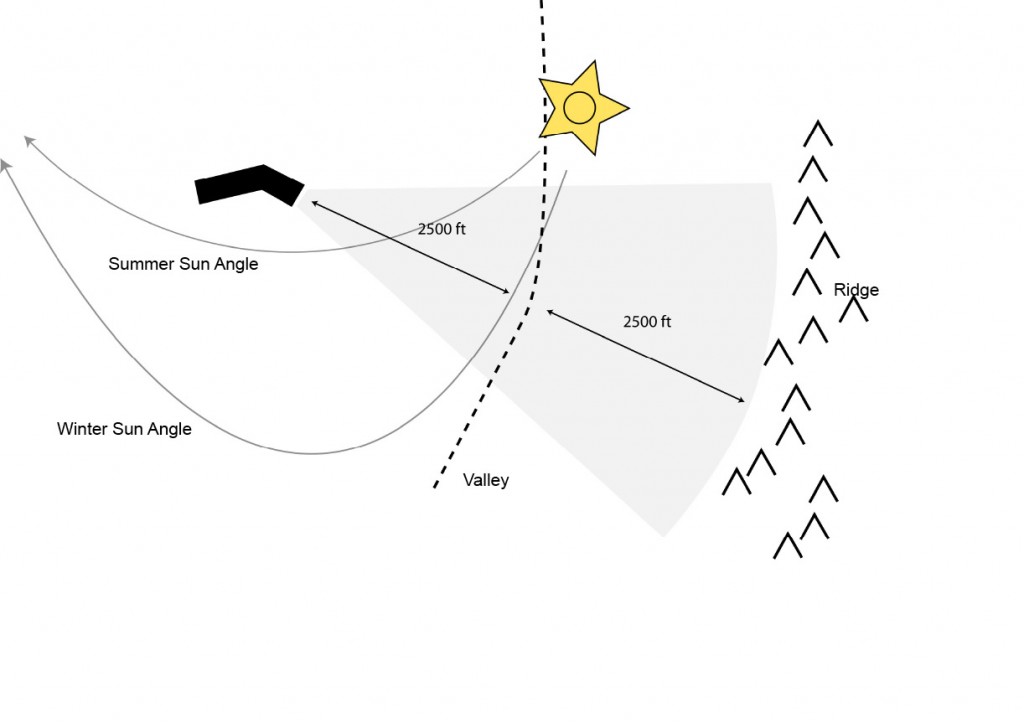 In the image below the existing conditions in the living room are shown.  The view is beyond the wall with the fireplace and two windows.  The fireplace is rarely, if never, used.  Blinds on the two arched windows are generally closed during the day when the intense sun passes from east to west.  Once the sun passes due south, shadows creep across the face of this wall and the blinds can be opened. The room is centralized around the patio outside the french doors on the left side of the image.  DESIGNlinkup has the patio and it is a nice patio.  Don’t take this wrong, but a nice patio can be anywhere.  What is unique to this property is the view.  This is literally, a million dollar view.  Why not embrace it? 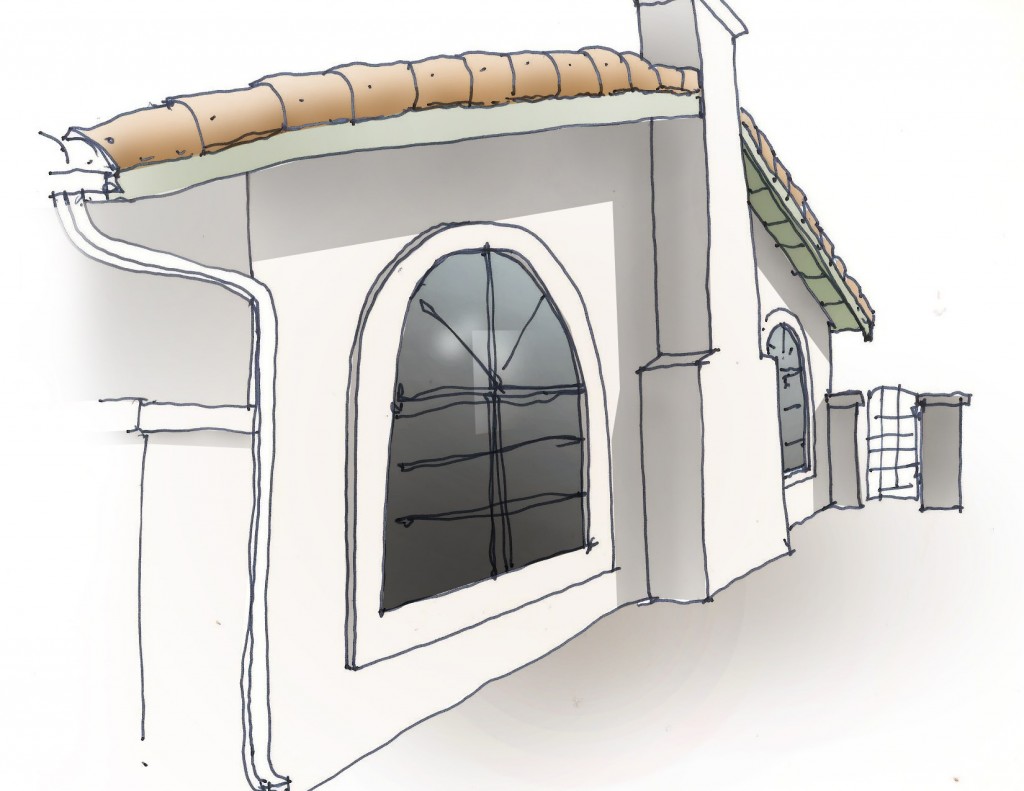 Let us first address the easy fix for the daytime light levels in this room.  It is pretty dark for two reasons.  One, compared to the size and volume of the space, there’s minimal glazing to the the east, south and west.  Two, there are white walls outside the north french doors on the northeast side of the living room.  In the afternoon, sun light bounces off these walls into the house increasing the contrast ratio.  This in turn makes the room feel dark.

As seen in the interior sketches, the living room has a vaulted ceiling.  The customer is considering replacing the roof in the near future.  Considering the vaulted ceiling and the plan to replace the roof, a very easy and inexpensive option to bring daylight into the space would be to install skylights in the room.  Per unit area of glazing, light coming in through horizontal glazing such as a skylight can bring in up to three times as much light as a vertical viewing window.  Therefore, a fairly small skylight has the potential to radically modify the feeling of a space.

Okay now on to the big move!  DESIGNlinkup proposes to open up the southeast wall of the living room to the view. 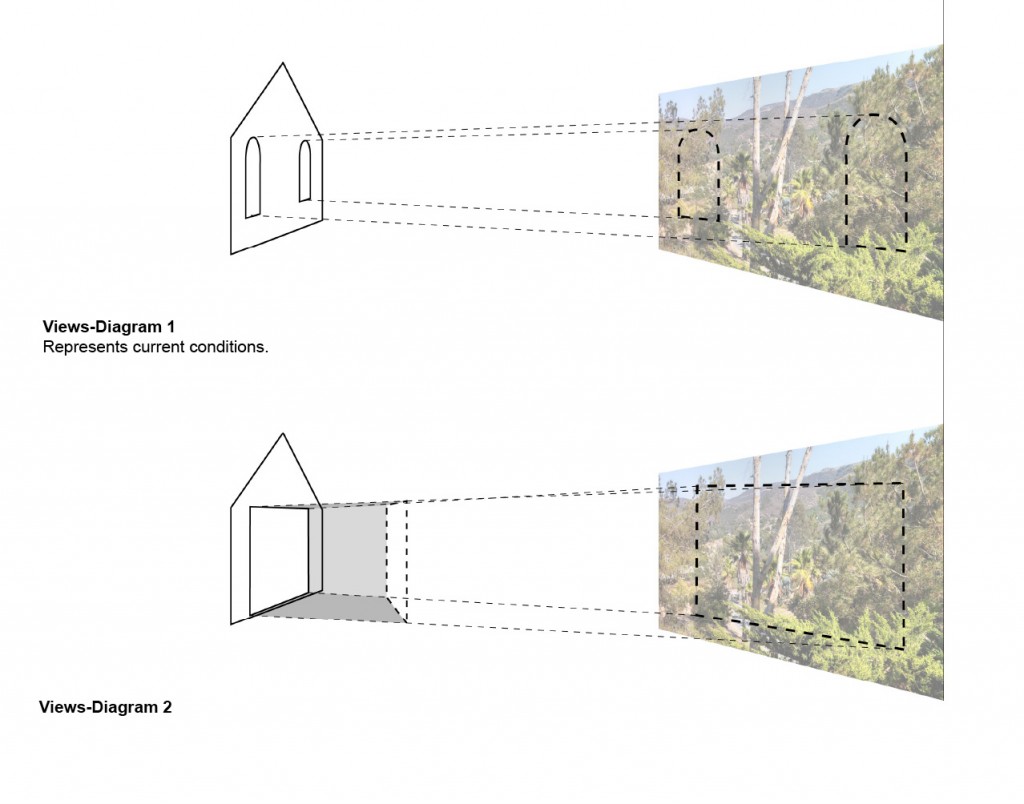 Illustrates how a) the sense of space can expand outside with the addition of a large opening in your exterior wall and b) the resultant establishment of a larger viewing plane.

The windows and fireplace would be demolished and the southeast wall of the living room opened up.  A beam would span the approximate 15′ opening centered on the wall.  New posts and foundation work would have to occur to support the new beam.  DESIGNlinkup imagines five folding doors. 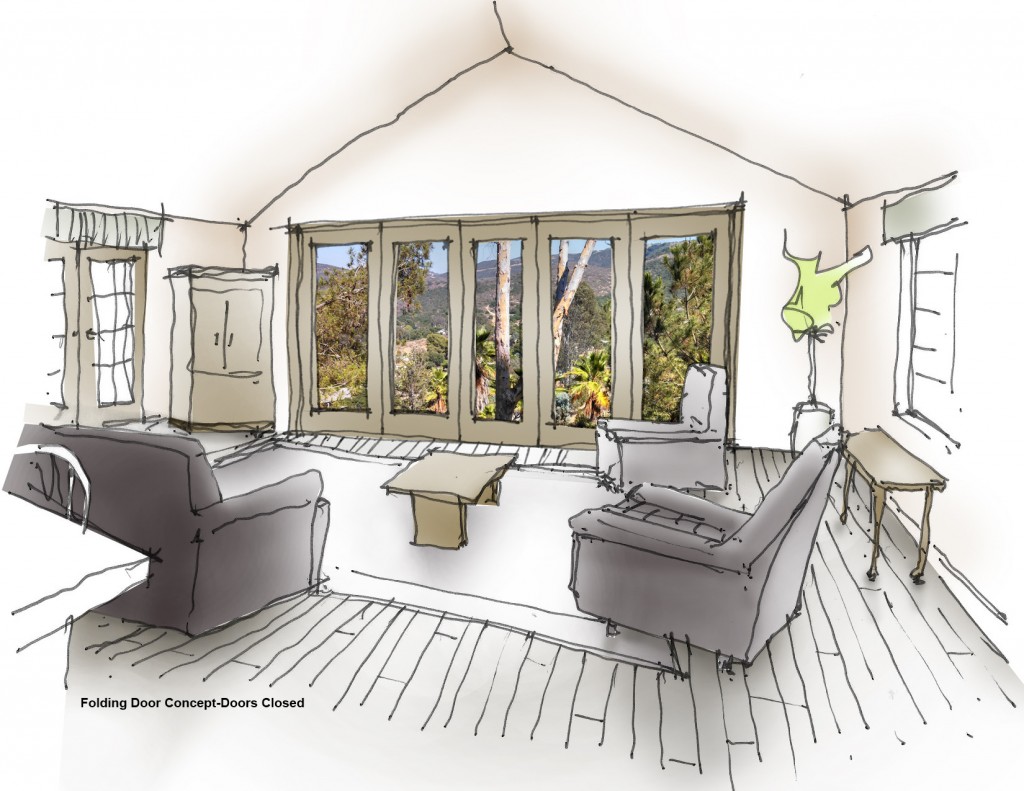 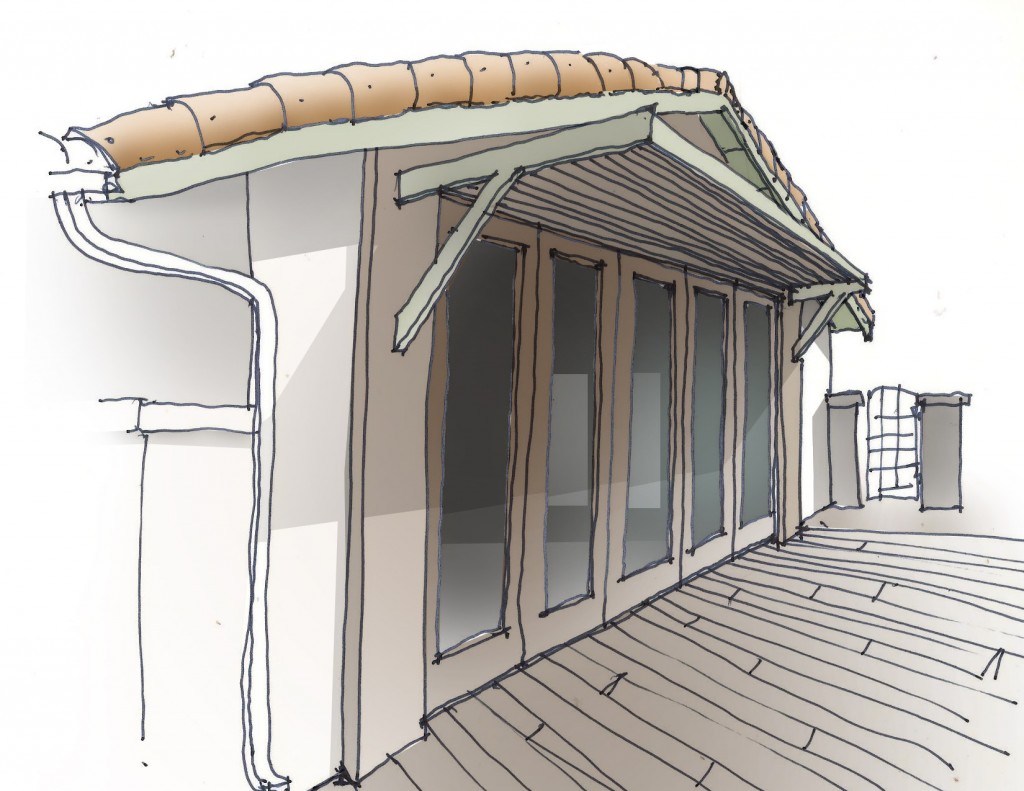 With the doors open, we imagine the living room volume seeming to expand out into the exterior environment, blurring the border between interior and exterior space.  Considering that southern California weather is nearly perfect year-round, this transformation could be enjoyed abundantly.  Imagine walking in the front door, turning right into this living room and boom, nothing between you and the hills across the valley.  It brings a tremendous sense of hierarchy and order to the space now because the central focus of the room is so clear and powerful.  All other elements of the room would play a support role to this dominant feature. 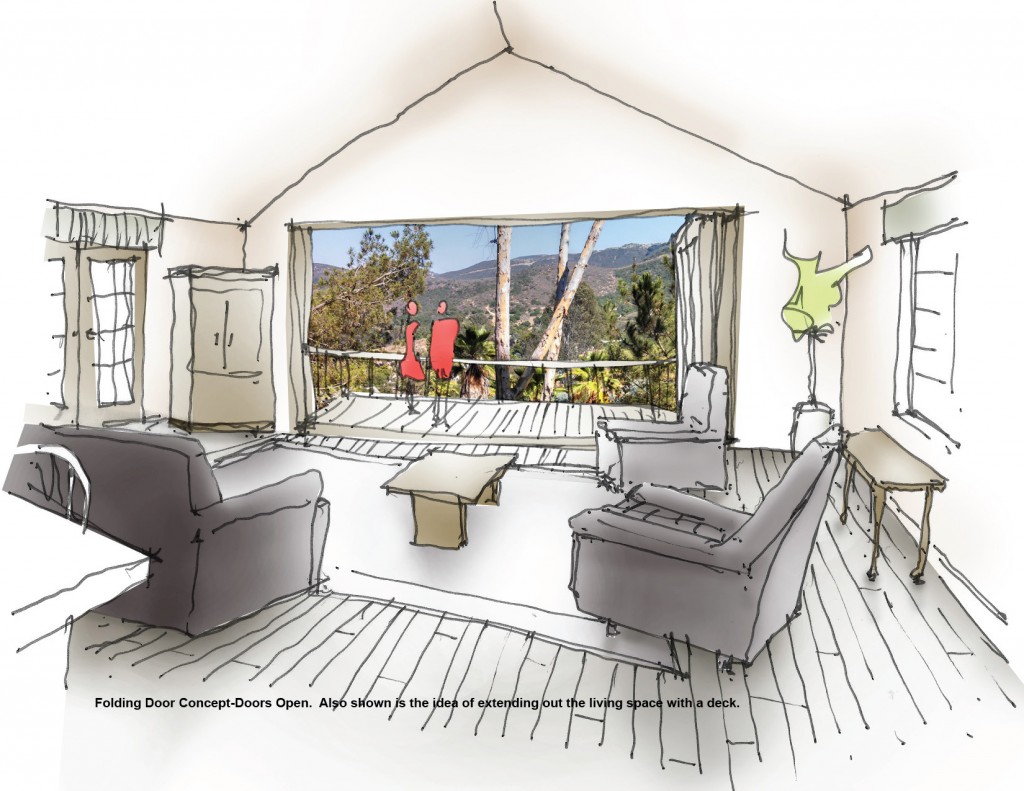 In the proposed exterior sketch above a shading device is used.  The purpose of this shading device is to prevent direct solar gain during the hotter months of the year.  Below are simplified wall section diagrams that illustrate how to control daylight for a southern exposure.  Diagram A show how daylight will enter the living room through glazing-fairly self explanatory.  Note the sun’s rays will directly bounce off interior features of the home, adding significant heat and glare-negative environmental factors much of the year.  This is a concern that is currently address by closing blinds.

Diagram B employs a strategy as shown in the above exterior sketch that uses a horizontal surface above the glazing to block direct sunlight from entering the fenestration. DESIGNlinkup recommends the shading device be deep enough to block summer sun (more vertical sun angles) but short enough to allow winter daylight to pass through the glazing (more horizontal sun angles) and at the same time minimize the moment caused by the cantilevered weight of the sun shade.  Generally low-angle winter sunlight is welcome when directly introduced into occupied space because it is not as intense as the summer sun and helps heat interior space.

Finally, diagram C places glazing above the sunshade in the wall to allow bounced light to enter the interior space.  This bounced light will in turn illuminate the ceiling which will transform the feeling of the living room as light will be more equally distributed throughout the space and will penetrate deep into the room.  In turn, the living room will feel much brighter without having to deal with glare.  I would recommend some kind of translucent glass for the high glazing to block direct light from entering.  Since this glass is not meant for views (that’s what low glass at eye level is for), translucent glass will not have any negative impacts as compared to clear glass.  The above sketches take the concept to the diagram B level. 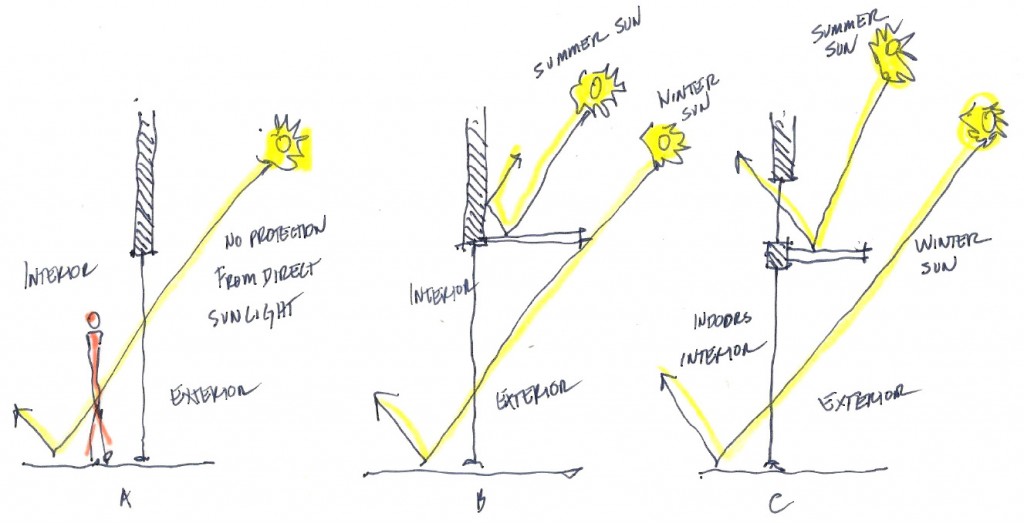