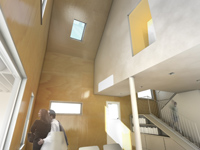 The design challenge was to come up with ideas for a simple, energy efficient home on an urban infill site.

The site lies just outside the downtown core of a northwest US city.  The site is 40 x 100 feet, long axis of the site east-west.  The rear of the site has alley access.  Any concept would only need to allow space for a two car garage with alley access however would not have to include the garage in the design.  The main street runs north south on the west side of the property.

The living space will need to be under 1,000 square feet.  Sustainable design should drive any concepts proposed.  Connections to the outdoors are important, both for visual connection and for opportunity to move social events outdoors easily.

DESIGNlinkup decided to work within the confines of a rectangle to help reduce construction costs.  Since the long dimension of the site faces north and south, the opportunity to utilize photovoltaics on the roof.  Our concept places the home on north side of the site to allow for garden space on the south side of the lot. 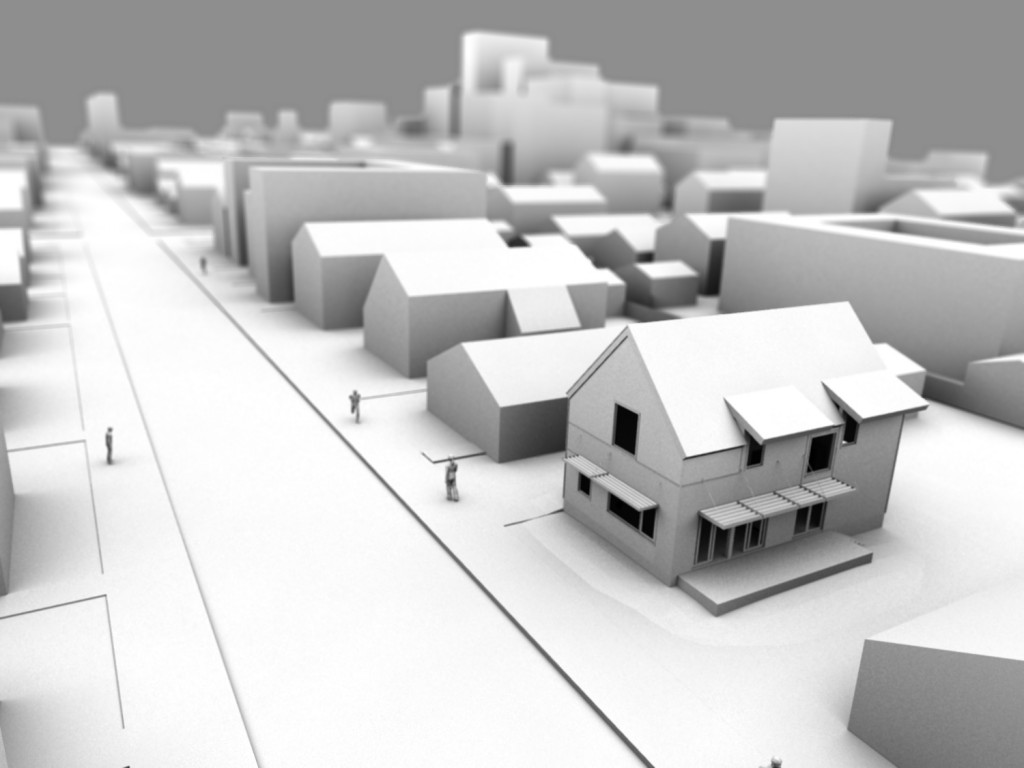 Model of concept on site.

A two bedroom concept is proposed.  Two story volumes rise above the first floor above the living and dining rooms.  This allows for visual connections between the first and second floor. 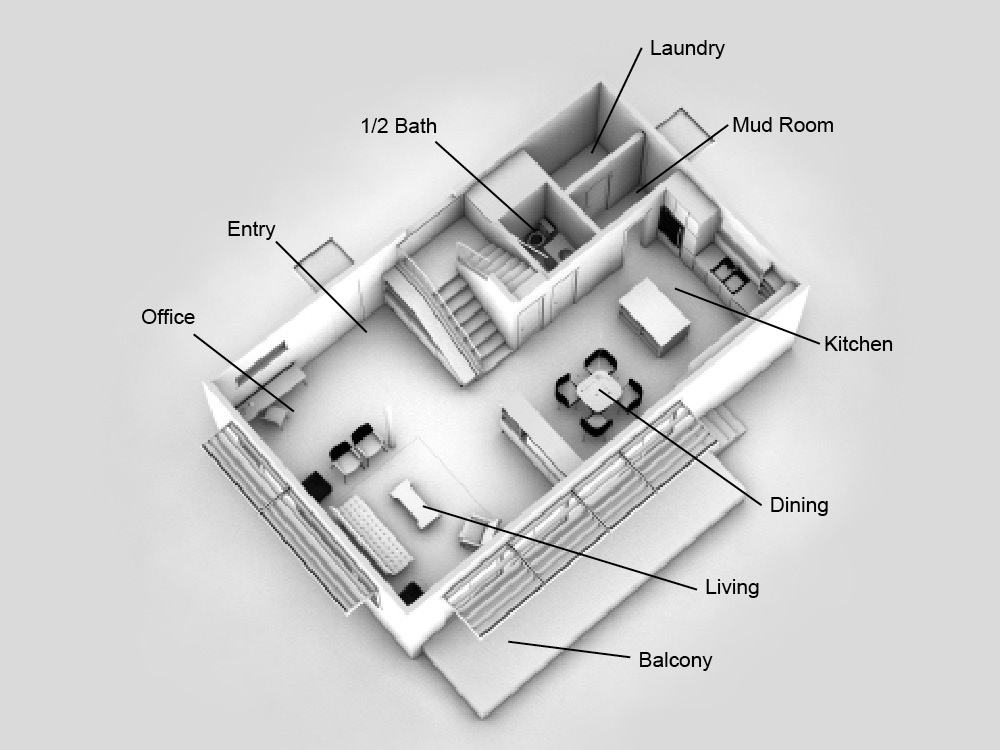 The entry is on the north side of house.  This is an open first floor concept with the living space being placed on the south side of the home to provide visual connections to the yard and allow for direct sunlight to enter the space during colder winter months.  Support functions line the north side (staircase, small restroom, and laundry room).

The two bedrooms upstairs act as separate suites as they both have designated bathrooms. 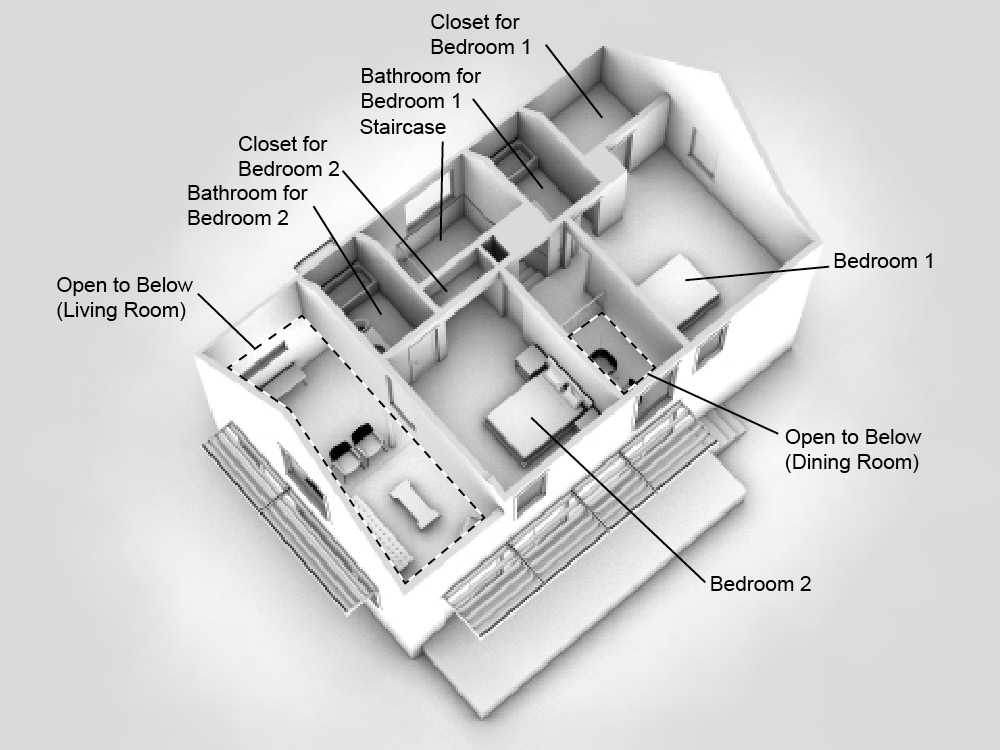 Let’s take a look at a few interior renderings. 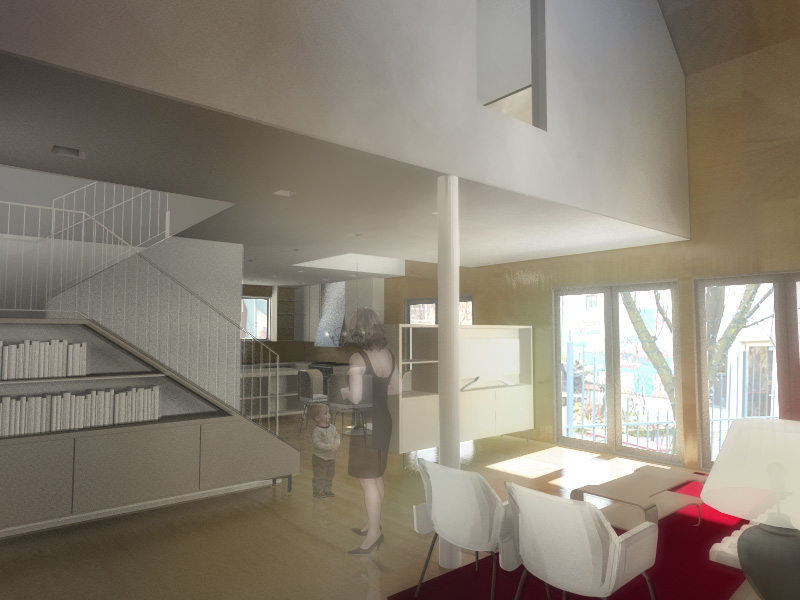 From the office off the main entry, there is a visual connection to the living room, dining room, and kitchen beyond.

The choice of materials emphasizes the notion of a external shell and the internal components. The shell is simple in form-a rectangular box and clad in polished plywood.  The internal components, clad is gypsum wall board, are more complex as they grab the external shell in some places, but then recedes to allow volumetric expression and visual connection to the upper floor.  The different surface treatments accentuate the differences in purpose.  In addition, the light color of the interior volume plays a functional role as it reflects direct solar gain throughout the interior volume as shown in the interior images. 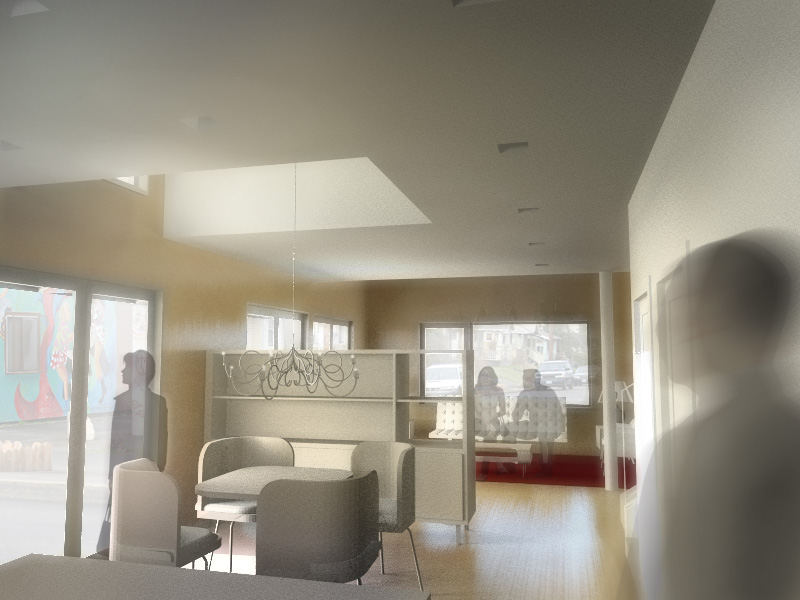 From the kitchen looking back toward the dining and living rooms. 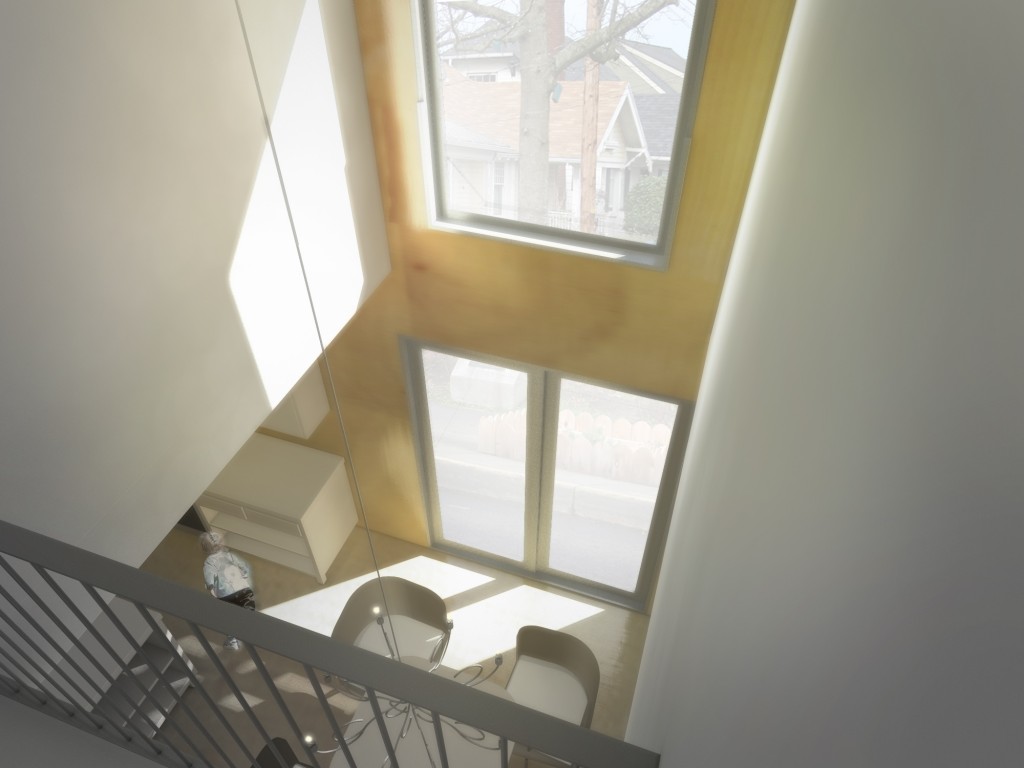 Upon reaching the top of the stairs, there is a visual connection both down the dining room and outside.

Below, light is seen coming through viewing windows, high vertical glazing, as well as glazing on the roof.  This both increases the amount of daylight in the volume and helps equalize the amount of daylight in the space reducing the contrast ratio.  Note that bedroom 1 enjoys an interior window serving to borrow natural daylight from the living room volume.  Each bedroom has windows on two walls. 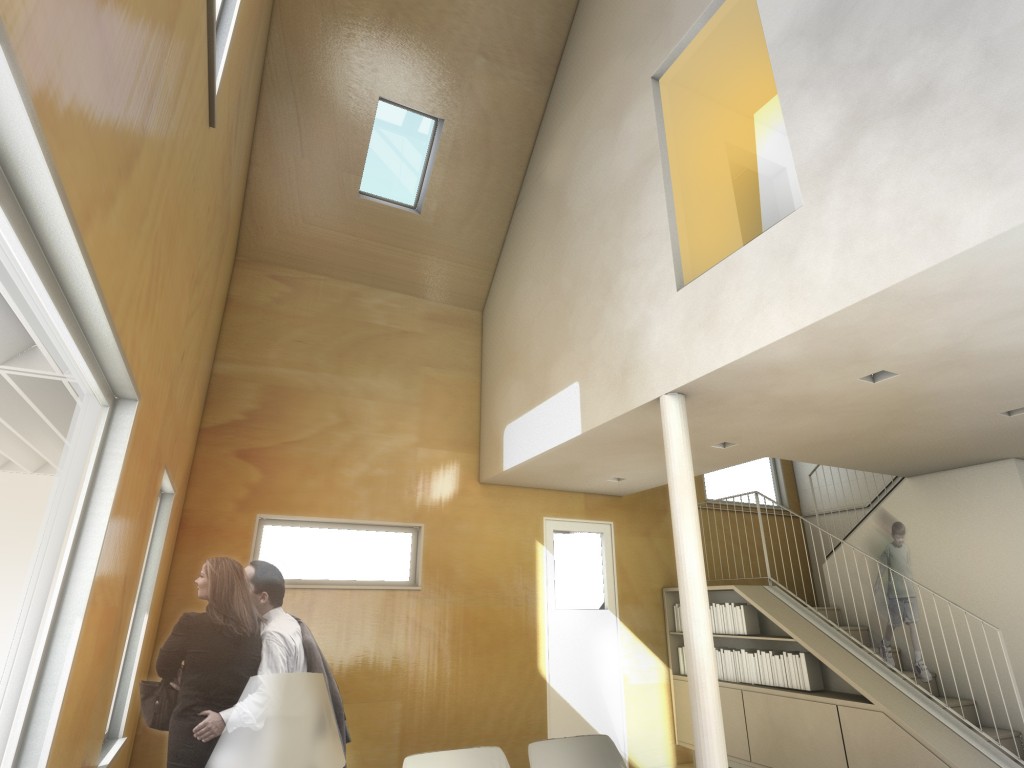 Light comes in from overhead and from high windows. Indirect light passes into bedroom 2.

The exterior cladding consists of two different sizes and colors of siding material to create a pattern that wraps around the house to grab different components of each exterior elevation while attempting to maintain a comfortable balance between the two interactive patterns.  The patterns formed are intentional; the golden mean is the basis for defining the boundary of each surface treatment which includes the shape, size and position of each window.

The shape of the home, include the roof is utilitarian.  Roof overhangs are present only where there is a functional purpose.  On the southern elevation, overhangs are present over the two bedroom windows to prevent direct solar gain during the months of most intense sunlight.  The roof is standing seam metal, to allow for the capture of rainwater.  Photovoltaics are on the southern face of the gable roof. 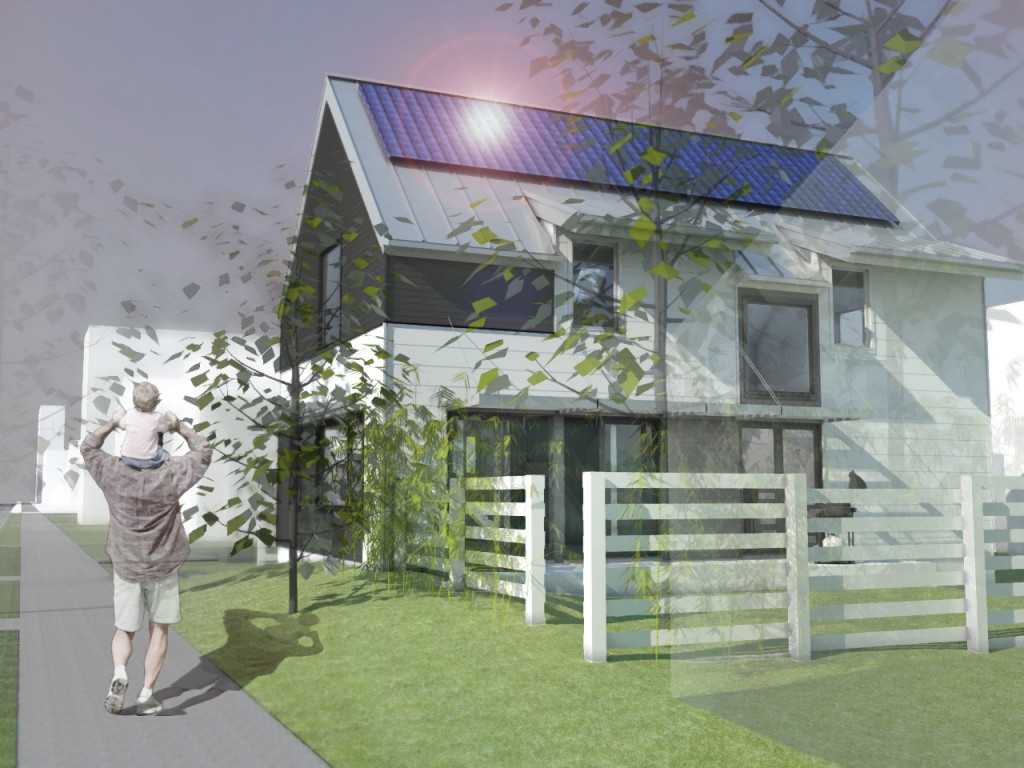 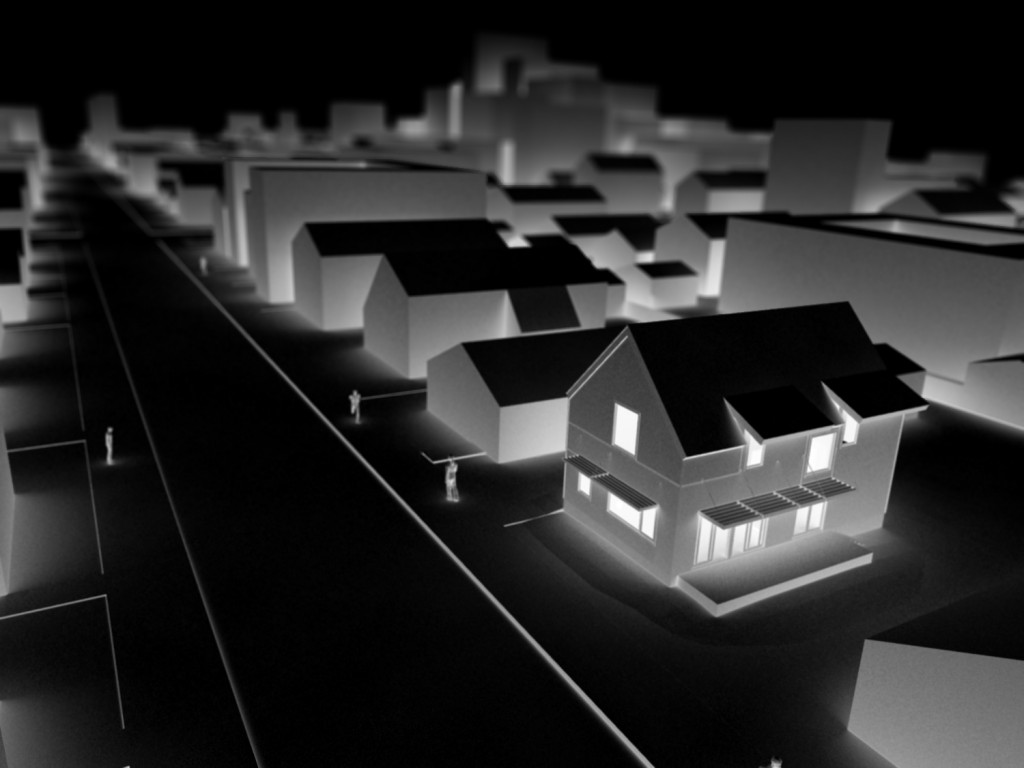